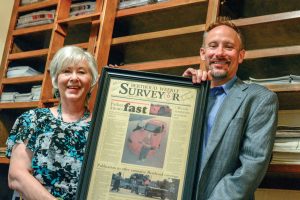 Becky Justice-Hemmann and Robb Justice, owners and founders of the Berthoud Weekly Surveyor, hold teh first edition of the newspaper that was published on June 16, 2004.
John Gardner/ the Surveyor

The Berthoud Weekly Surveyor celebrates 10 years of business on June 16.

The current publisher, Becky Justice-Hemmann, along with her son and business partner, Robb Justice, started the newspaper after being approached several times by community leaders.

The pair had started Media Innovations, a successful marketing, newsletter and business promotion company, approximately two years earlier. At first they were nervous about starting a newspaper from “scratch,” especially since neither of them had any newspaper publishing experience. But after having the idea presented repeatedly over the span of a few weeks, they decided to take a serious look at the idea.

They immediately sent Media Innovations’ sales personnel onto Berthoud’s streets to sell advertising in the “yet-to-be-named” Berthoud newspaper. The paper began its existence in May 2004 with Justice named as publisher of the newspaper, while Justice-Hemmann’s focus stayed on Media Innovations.

Jill Boyd, a talented, intelligent and energetic young lady who was raised in Berthoud and knew the community well, was hired as the publication’s first editor.

The next hurdle was finding a name for the fledgling newspaper. A Media Innovations employee took on the task of listing the name of every newspaper in the United States. During a brainstorming session to find an appropriate name it was Boyd who stated, “Captain Berthoud was a surveyor. Why not call it the Berthoud Surveyor?”

“Upon consulting the list of newspaper names and finding no others with the name ‘Surveyor,’ we felt good about the name and went with it,” said Justice-Hemmann.

Justice later added the word “Weekly” to the name to make shorthand for the newspaper “BWS instead of simply “BS,” for obvious reasons.

The first edition of the Berthoud Weekly Surveyor was published on June 16, 2004. With Boyd at the helm for approximately the first two years, the Surveyor prospered. She left for other opportunities in 2006, at which time Rick Padden took over the editing duties. Padden continued in that role until 2009.

In early 2006 Justice-Hemmann’s husband Rudy Hemmann joined the team as a reporter, focusing on town government. In early 2008 Justice had left the team for a position in telecommunications sales.

This left the roles of editor and publisher to be filled by Justice-Hemmann, which she accomplished until mid-summer of 2013 when John Gardner came on board.

Since the newspaper was founded, the Surveyor has won over 80 awards from the Colorado Press Association.

The Surveyor has been at its current location, 440 Mountain Ave., since January 2007.

Justice-Hemmann is fond of saying, “The Surveyor is all about Berthoud.” She continually points out that the paper carries few articles which are not related directly to the Berthoud community or Larimer County news that affects the town.

The Surveyor staff invites subscribers and advertisers to an open house to share cake and refreshments on Wednesday, June 18, from 1 to 4 p.m. to celebrate this milestone for your hometown newspaper.

The Surveyor is also hosting a Berthoud Area Chamber of Commerce business after-hours event beginning at 5:30 p.m. after the open house.